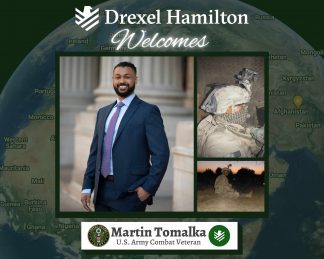 and Weapons Squad Leader. While stationed overseas in Germany as part of 2d Cavalry Regiment, he deployed to Afghanistan in support of Operation Enduring Freedom. After leading teams in high-pressure combat environments, Martin returned stateside spending his last year in the Army as part of 3rd Infantry Division at Ft. Stewart, Georgia. The Las Vegas native returned home to study at the College of Southern Nevada before transferring to Columbia University where he earned a degree in Economics and Psychology in May 2022. Upon joining Drexel Hamilton, he hit the ground running quickly earning his Series 7 and Series 63.

Martin, we are so pleased to have you on our team!